From Eigen
Jump to: navigation, search 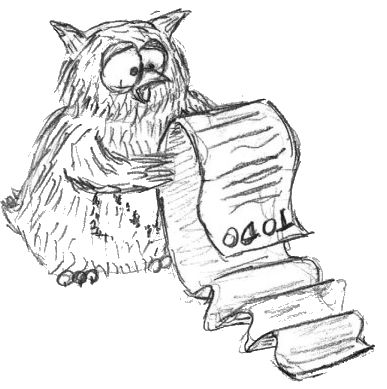 This is the general, long-term Todo list, with a special emphasis on open jobs for new contributors to tackle. There is also a separate Todo for 3.0 aimed specifically at preparing Eigen 3.0.

Before you start spending time on any of these items, contact us about it!

So by contacting us you can avoid any bad surprise.

At some point we will definitely want that parallelization occurs inside Eigen itself. Details are there: Working notes - SMP support.

Although we have very good performance for 1 CPU core, we don't have any parallelization so we don't take advantage of multicore CPUs; and we also don't take advantage of GPUs. An easy way to address that, is to implement BLAS and LAPACK backends for common heavy operations (matrix product could use BLAS, eigensolvers could use LAPACK...). In this way, users may use Eigen together with optimized BLAS/LAPACK libraries. These backends would be optional of course. An example to follow is how the Sparse module already has optional backends. This job is very accessible to someone who doesn't necessarily have much Eigen experience, and is very useful.

BLAS implementation on top of Eigen

This is the converse of the above job. We could offer a BLAS implemented using Eigen.

Update: This has been started and already well advanced by Gael, see blas/ and lapack/ directories. The eigen_blas library is complete. The eigen_lapack currently implements cholesky and lu decomposition. Contact us if you want to help.

This module should provide easy to use optimization routines for non-linear minimization, differential equations, etc. For instance, I'm thinking to algorithms such as Levenberg-Marquardt for least-squares problems, the multiple Runge-Kutta variants for ODE, etc. Those routines should provide a flexible interface. For instance, with respect to the derivatives, it should allow to either provide them manually, ask the routines to compute them using finite differences or using an automatic differentiation library (eg., adolc).

Note that this module is highly related to the Sparse module and other linear and dense solver modules (LU, Cholesky, etc.).

Status There is an experimental module in unsupported/NonLinear, which provide good implementation of Levenberg-Marquardt and non-linear system solving, based on the algorithms found in the well-known netlib package "MINPACK". It can use the unsupported/NumericalDiff' module.

Initial support for Automatic differentiation (one based on adol-c, and one purely in eigen) is already present in the devel branch under unsupported/Eigen/AutoDiff.

This module is essentially complete and working, but needs improvement in these areas:

It would be great if Eigen used Julien Pommier's fast, SSE optimized log/exp/sin/cos functions available from this page. Done for sin, cos, log, exp

Available job: do the same for other functions taking inspiration from [cephes] (tan, acos, asin, atan, etc.) note: have to discuss which functions are useful and which aren't.

The current implementation uses code from JAMA. It supports MxN rectangular matrices with M>=N of real scalar values (no complex yet). It also provides a robust linear solver. job (bjacob handling this at the moment):

This seems to be taken care of by Marton, see his branch at http://bitbucket.org/marton78/eigen/ , feel free to contact him to offer help...

A new effort was started in May 2009 by Mark Borgerding to port/adapt kissfft to Eigen. More information about progress and opportunities to help out can be found at the EigenFFT page. The code is on the main development branch, under unsupported/Eigen/src/FFT

A previous offering was initiated by Tim Molteno. See this ML thread for the details. He offered a template metaprogramming example that, while clever, had two drawbacks. It was only capable of power-of-2 transforms and the size must be known at compile time.